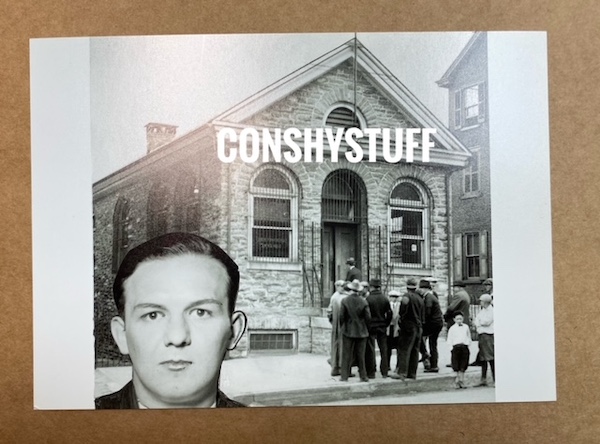 In West Conshohocken in the Spring of 1927

And In Conshohocken in 1934

So I’ve been spending time cleaning up, and cleaning out my history files in my spare-time, (Yea, we all have a ton of SPARE-TIME) and I was thumbing through my “Police Files.  I try to file information and articles by decades, I have police files going back before 1900. Just to be clear, information I have isn’t so-much on individual police officers as much as crime and incidents that have happened in the town for more than a century.

I’ve printed a number of these incidents in my books or feature articles over the years.  I wouldn’t call these articles fun to read or relaxing.  But I did run across two articles I printed a decade ago in the book “Tales of Conshohocken and Beyond” that I thought just might be entertaining, or enjoyable to read and recall criminal incidents that happened more than eight decades ago.

The opening of the bank in West Conshohocken made the residents very happy as most all of the residents kept their money in Conshohocken banks which could cause a big inconvenience during the winter months, remember most residents didn’t have automobiles and the long walk across the Matsonford Bridge could feel like a three mile walk when the cold winds were blowing off the river, the People’s National Bank was a gift for those residents.

As stated the People’s National Bank was opened in 1907, and twenty years later in 1927 the bank was held-up, robbed, and it would take several years to solve the crime.

So with the early background out of the way, I thought I would simply re-run the piece from the book “Tales of Conshohocken and Beyond;

On the morning of May 18, 1927, everything seemed normal in West Conshohocken.  By all accounts it was a beautiful spring morning in the West Borough as Nineteen-year-old Gerald Rath who was the cashier at the People’s National Bank on Ford Street opened the bank doors promptly at 9 a.m. like any other morning.  The young cashier was the only employee in the bank that morning. (This wasn’t unusual for one employee to be in the bank back then)  Suddenly, four armed masked bandits entered the bank, breaking the morning silence.  All four bandits pointed revolvers at Mr. Rath, ordering him to hold his hands up high and push out all available cash.  Rath complied and handed over $1,050.  The bandits with faces covered took the money and jumped into a Reo Tourist Car, where a female driver waited outside the front door of the bank.  The car raced away at a very high rate of speed, crossed the Matsonford Bridge at an estimated forty or fifty miles-per-hour, and disappeared.

Rath later told reporters that he was told by the bandits to “Shut-Up, and turn your back or we will kill you.”  Rath said that he obeyed them but only after they pointed pistols at him.

Later that month, Gerald Rath and Conshohocken Chief of Police William Heald traveled to Philadelphia in an attempt to identify one or more of the bandits in a police lineup.  Philadelphia Police had rounded up a group of gangsters in other related crimes, and none of the suspects fit the description of any of the West Conshohocken bank robbers.  According to Rath, none of the gangsters in the line-up looked like any of the robbers.

The case stayed open for four years before the bank robbers dubbed “The Bandana Gang” were caught one by one and sentenced to jail.  At the time, ten years in prison was the going rate for armed bank robbery.

Renovations to the building included adding a concrete floor in the basement and walls plastered.  Part of the basement had two jail cells installed along with a new, what was called a “Heating Plant.”  The first floor was divided into three rooms.  The council chamber was located in the front room and was entered from the door leading to Ford Street.  Directly in the rear of the council chamber was a small room which was used for committee meetings and beyond meeting room was a room that had been equipped as an office and hearing room for the Burgess.  The vault used by the trust company was not disturbed and was used as a storage room for borough records.

All walls on the first floor had been painted in buff and light brown and new furniture had been installed for both council chamber and the office of the burgess. (Mayor)  The alterations were completed at an approximant cost to the borough of just under $1,000.

Remodeling of the building had been completed under the supervision of John S. Trinsey Jr., head of the Rebel Hill Park Inc., at a cost of $2,850 to the borough and an additional $3,900 that Trinsey had contributed as an expression of appreciation for the town’s interest in endeavoring to annex 107 acres from Upper Merion Township so that the corporation could erect three high rise apartments.  For those of you who might remember Trinsey’s Rebel Hill project would have cost an estimated $35,000,000.  (Remember this was 1960)  He also promised the Sewage flowing outside into the gutters of the borough would be eliminated with the installation of a sewer system and erection of a sewage disposal plant.

It was later determined by the Westside council that the idea of high rise buildings in West Conshohocken was a ridiculous idea, and yet thirty years later, right there in the heart of the borough is all those high rise buildings, it should be noted that Jack Trinsey was a man ahead of his time, or at least a man ahead of West Conshohocken’s Borough Councilmen of the time.

Thirty years after the 1960 renovation West Conshohocken borough leaders were at it again in 1990 with an aggressive expansion and renovation plan for Borough Hall.  Before renovations to the current building were discussed residents and members of council debated the purchase of the old West Conshohocken High School building.  The building once located at Moir Street and Bullock Avenue had a purchase price tag of $800, with another $200, for renovations.  More than 100 residents packed George Clay Fire Company Hall as Borough Council members voted 3-2 to reject the purchase.

The expansion for the current borough hall at the time was estimated to cost $250,000 and would add an additional 1,000 square feet that would include needed office space, handicap ramps and an expansion of the police department.  By 1993 the renovations were completed.

Over the years a number of bank robberies have been attempted in Conshohocken, off the top of my head, (Running without actual facts here so feel free to correct) among the attempted robberies was one at PNC Bank back around 2000 when a couple of clowns were caught hiding behind the banks air conditioning units waiting for the bank to open.  A more successful robbery was the one at the former Bank of America where a male robber made his get-away up Fayette Street on his bicycle.  In 1976 the Conshohocken Federal Savings and Loan Association branch, (CONFED Bank) once located at Second Avenue and Fayette Street was robbed by a 15 year old juvenile.

According to Conshohocken Police Chief Raymond Alexander he stated at the time that $1,200 was lifted from the bank and found on the youth minutes after the robbery.  The youth was captured at Third Avenue and Fayette Street just outside the Lee Towers facility just one block north of the savings and loan branch.

I also have on file a record of a 1978 armed hold-up that netted the robbers $17,000. This stick-up took place outside the PNB Bank at Fifth Avenue and Fayette Street.  An employee was with a Conshohocken Policeman escort when four armed men approached the officer from the rear, disarmed him and took the money from the company employee and quickly disappeared.  The robbers jumped into a get-away car, changed vehicles at Third Avenue and Maple Street, and were never heard from again.

AND NOW WE MOVE TO

Stole Two Mail Sacks as Messenger Carried Them From Trains.

This Morning—Strange Men –Dressed as Laborers Seen in Streets Since

6a.m.—Escape in Car—Recovered a rifled Mail Sack on North Lane.

(Just a side note, years ago newspapers ran a headline and a sub-headline that sometimes took up half the page.  The sub-headline is exactly the way it ran on June 1, 1934)

This was the morning headline in the Conshohocken Recorder Newspaper on June 1, 1934.  The article went on to describe the daring daylight hold-up as a Jesse James type train robbery.  Fifty years earlier James was notorious for robbing mail trains in the West.

The registered mail sack contained at least $17,000 in cash bills of small denomination.  ($17,000 at the tail end of the depression in 1934 was a ton of money).  The registered package containing the money was addressed to the First National Bank of Conshohocken and sent by the Federal Bank of Philadelphia.  According to Donald Horsey, a cashier at the bank, most of the money would have been distributed among seven small industrial payrolls in Conshohocken.

It was noted that Conshohocken Chief of Police Francis Blake usually accompanied the mail carrier on Fridays but had the day off.  It was believed that the robbers were not only tipped off about the cash but were also cognizant of the fact that there would be no police protection for the delivery.

Thanks to the detective work of Chief Blake and other law enforcement officials the round-up of the robbers started within two weeks of the daring railroad robbery.  By June 15, four of the bandits were behind bars and by the end of the month the rest of the participants were also in jail, including the local mail carrier who supplied the information about the movement of the mail carrying the money.

The Great Train Robbery dominated the headlines for a month in Conshohocken.  All were found guilty and served time in prison for armed robbery.  According to local newspapers Chief Blake played a major role in the capture and conviction of the criminals.

So there you have it my friends, a bank robbery, and a train robbery, with a little West Conshohocken Borough Hall history on the side.  Some folks reading this might think the Conshohockens were like the Wild Wild West a hundred years ago, well I’m here to tell you that at times, it was like the wild wild West.  Perhaps as I continue to clean up my police files I’ll come across the story from 1936 when bandits broke into a tobacco warehouse and loaded up their car with more than a few goods.  Police gave chase firing shots out of the car window as the bandits drove at a high rate of speed down Elm Street, it looked like a scene out of an “Elliot Nest” movie, bullets were flying out of both vehicles, the bandits car was riddled with bullets and one Conshohocken police officer was shot, yea, maybe I’ll dig that one out.

Maybe Conshystuff should start a whole new series, you know, instead of “History of a House,” we could have ‘Good Guys and Bad Guys,” The Conshohockens have had a whole lot of both.

Crowds gather outside the West Conshohocken Peoples National Bank following the armed robbery on May 18, 1927, Gerald Rath is pictured in the insert on the lower left of the photo.

An architect’s drawing of the proposed additions to West Conshohocken Borough Hall from January 1990.

Construction of West Conshohocken’s Borough Hall was well underway in 1993.

Conshohocken’s Train Station in the 1920’s.