Veterans Day – We Owe You One 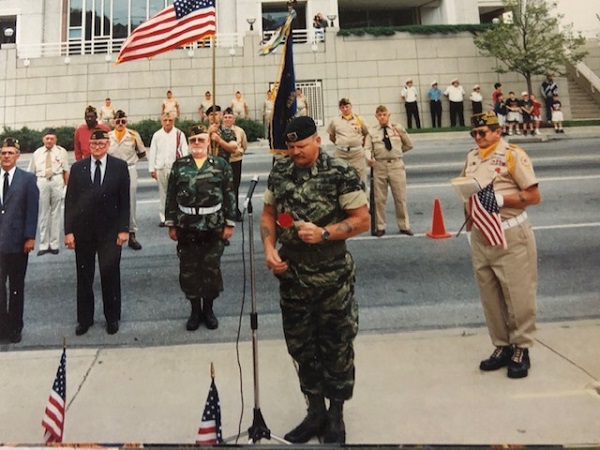 We Owe You One

Thanks to the Men and Women of this Borough

And Thanks to the Men and Women throughout the Country

Let’s start by saying Thank You, Thanks to all our Veterans, past, current and future, It seems to me that we live in a 2020 society that don’t use those two words enough so I’ll say-it again, Thank You Veterans.

On this Veterans Day 2020 and this past weekend our Veterans will be out in Conshohocken and throughout the country performing ceremonies at monuments and local cemeteries.  Conshohocken and our surrounding communities have a lot to be proud of when it comes to honoring our veterans.

I’ve written about these veterans many times over the years, I’ve written about World War One and how the Federal Government named a merchant marine ship “The Conshohocken” in honor of our community’s service, I’ve written about how during World War Two one out of every seven residents in Conshohocken served in the military and hey! One out of every six West Conshohocken residents served our country during World War Two.  And one of the Conshohockens great pieces of history was our own Battery “C” and how they marched down Fayette Street with the entire town’s population cheering them on as they marched off to war only to return six years later, several members of Battery “C” gave their life for their country.

At different times I’ve written about West Conshohocken’s involvement, the different members of the local fire companies whose volunteers marched off to war.  I’ve written about different organizations and a number of the factories like John Wood who posted “Service Honor Roll” signs with hundreds of employee’s names on that board only to give them their job back when they returned from war.  Just to give you an idea of the many men and women who went off to war, in 1946 and the end of World War Two the Conshohocken Veterans of Foreign Wars Commander Jacob Ruser announced that more than 600 Veterans of that war were engaged in the Post at that time.

On this Veterans Day let us recall a small chunk of our area’s history by reflecting on the Cedar Heights community involvement during World War Two.  In the summer of 1944 the Cedar Heights community erected a “Service Honor Roll” sign that was located on the corner of Roberts Avenue and Wells Street.  Records show that the very first ”Service Honor Roll’ ever erected in Whitemarsh Township was located at the left of the entrance of St. Peter’s Lutheran cemetery, Barren Hill, dedicated September 5, 1865.  The Honor Roll of the community’s dead of the Civil War was sponsored by Post 79, G. A. R. of Conshohocken.  The records of the names on the honor roll were lost when St. Peter’s Lutheran Church was destroyed by fire in 1899. Another little piece of Whitemarsh Township history was the very first public Flag-raising in the Township that was conducted with religious services on July 4, 1878 by the Patriotic Order Sons of America of Flourtown.  The pole was 115 feet high and the pole was destroyed by lightning on July 23, 1891.

The Cedar Heights “Service Honor Roll” was constructed by Robert W. Wright, Sr., who lived at 362 Summit Avenue and was the head of the Community Service Club of Cedar Heights. The sign was dedicated on a warm July Sunday afternoon with services that included both the Boy Scouts and Girl Scouts of Cedar Heights, speeches from Magistrate Keller Gilbert and Rev. William Garman, Pastor of Cedar Heights Community Church.

Here’s the thing, Cedar Heights is a small community, a very small community and there were 92 names on that Honor Roll sign in July of 1944, I’m sure with more to be added, 92.  In 1944 there were 96 properties and 102 families in the community.  92 males and females were in the service, a number of them overseas. Rev. Garman stated that was nearly one from each home, some families had two or three children in the service.

At that time, July 1944, Albert L. Barth, was the first and only Gold Star on the Cedar Heights Honor Roll.  Private Barth gave his life for the freedom of our country.  I’d like to take a few minutes and mention the 92 names on that Honor Service Roll, it would be nice if you took a minute or two on this Veterans Day 76 years later and read them:

If anyone has a photograph of the Service Honor Roll sign I would love to have a copy and it would be really appreciated, Thank You.

You don’t have to make it to a service today, but a little prayer would be nice!

Photographs used in this article are assorted Veteran’s and Memorial Day services from over the years.