Conshohocken hadn’t experienced a football reunion like this since 1968 when the Ironborough celebrated the 75th anniversary of organized football being played in Conshohocken. The first football team organized in Conshohocken back in 1893 was sponsored by the Y.M.A.A., (Young Men’s Athletic Association). In 1968 a parade highlighted with former warriors of the gridiron included guys like Pick Campbell, Frank Kriebel, Johnny Kelly and Elmer Allen. Dozens of men who played the game over the years were introduced at halftime during an Archbishop Kennedy Football game at the borough’s “A” Field.

On January 30, 2015, forty seven years after the 1968 celebration there was a parade of a different kind, as the elevator door opened into the ballroom on the second floor of the Great American Pub at 123 Fayette Street, the parade of former St. Matthew’s/Archbishop Kennedy football players went on throughout the night. Some came limping off the elevator, others needed a little assistance, and yet some of them came bouncing off the elevator like it was their senior year in high school and the three o’clock bell on a Friday had just sounded. The football reunion held at the Pub is by all accounts the largest reunion of its kind in the borough history of the sport.

The Sabia boys were there, strutting off the elevator with a pocket full of stories, Don, Nick and of course Matt who looked like he’d just got back from a 15 year stay in the mountains with his twelve inch beard. There was Joe O’Donnell who played for St. Matthew’s back in the 1944, he played with guys like Tex Burns, Tommy Nevins, Art Kehoe, Franny Carr, Eddie Stemple, Art Burke, George Lucey, Bob Ehlinger, Jimmy Moore and Ray Borzelleca just to name a few.

The 1944 season was interesting due to the fact that it was St. Matthew’s first year back after a seventeen year suspension of the football program. Forced to play much bigger schools, they didn’t fare well in the standings but did manage to pull off a couple of surprises. They beat Malvern Prep 13-0 in a game played at Villanova University’s field, Franny O’Connor and Ray Borzelleca scored touchdowns while Yippy Fondots, Johnny Gavin, Tex Burns and Donald Moore were all credited with playing a good game. The ’44 squad lost a very close game to Reading Central Catholic in a game played in a sea of mud at Albright College Stadium, torrential rains swept the eastern seaboard that weekend and the game played in a mud-bowl with players feet sometimes sinking into the mud up to eight inches deep looked like something out of a movie. As a result even though Reading Central Catholic was expected to win the game by four or five touchdowns, they only beat St. Matthew’s by a score of 7-0. St. Matt’s did beat Conshohocken High School 7-0 and in a hard fought game and tied St. Patrick’s 6-6 in 1944.

Everywhere you looked throughout the night of the reunion there were dozens of faces I recognized, Jason Januzelli, Steve Lepak, a couple of the Flocco boys, Alan Greidus and Andrew Guano, Joe Hendrzak and Chris Helverson. I hadn’t seen Anthony Calvanese since he graduated and he hadn’t changed a bit since the last time I saw him 25 years ago. Talking about not changing, I spotted a guy from across the room leaning on a table with his shirt unbuttoned, it was Ronnie Keaser, and he looked like he could suit up for a game next Friday night and still outrun most of the players on the field.

There were a number of Kelly boys there, I recognized Joe and Paul, and I think it was Charlie, Mike and Chris, “Kippy.” Kip played on the powerhouse 1981 undefeated team with guys like Jim Sheedy, Chris Boudreau, Andy DiPasquale, Andy Franks, and Gerry Rojewski. Then there was Bello, Schaeffer, Mitchell, John Boudreau, and Chris Hollingsworth just to name a few. Highlights of the season included Jim Sheedy scoring four touchdowns against Harriton and of course the 28-7 ass-kicking over Plymouth Whitemarsh.

Quite a few guys who played for the Catholic schools of St. Matt’s and Kennedy throughout the 1960’s showed up including Bobby Moore and Dominick Conicello from the class of 1963. Stan Siuchta, I think he played in 1963-64, John Storti who was a hard-nosed football player who graduated in 1960 also had two sons that played for the Saints in the 1990’s both John and Eric. Joe Barnyock, Bob Bowman, George Farrell, Dennis Dougherty, Charles Gambone, Rick Leflar, Martin Stalone, Dan Ganz, Bart Pettine, and George Schools all had a lot to talk about not just playing in the 1960’s, but what a wild decade it was.

I had a pretty good conversation with Leo Wisniewski who played in 1947, 1948, and again in 1949. Leo played on some pretty good teams, remember St. Matt’s had restored the football program in 1944 and although only winning two games in 1944, the team went 7-1 in 1945 before going 3-5 in 1946. When Leo arrived on the team in 1947 they went 4-4 that year with a scoreless tie against Conshy High. But in 1948 the team went 9-1 losing to Delone Catholic 6-0, but the ’48 club beat Conshy High 50-6, and in 1949 Leo and his team-mates turned in an 8-2 record losing to Delone and Lansdale Catholic but again beating Conshy High 23-6. That 1948 team was packed with talent under coaches Charlie Heavey, Harvey Borzelleca and Billy Bowe. The 48 team was led by Art Kehoe, Joe Watson, Joe Racicot, Ed Surmiak and Al Bruzda, all tough kids. Don Stemple, Bernie Nagle, Marty Kelly, Bill Mascio, Bill Blair, Charles Wilson, Eddie Hoy, Dan McTamney, Bob Fineran and of course led by quarterback Leo Wisniewski.

Wisniewski attended the University of Miami, a powerhouse at the time as a quarterback and first string safety before tearing his knee up sending him home where he began coaching with Charley Heavey. (More on Charlie Heavey later.)

I was told Barry Doganieri was at the reunion but I didn’t see him nor did I catch up to Chris Bockrath, I was told he arrived late due to his daughter participating in a basketball game. Tom Zadroga showed a little late due to coaching a kids basketball game (countless coaches have come out of the players of St. Matt’s and Kennedy).

John and Don Staudenmayer were making the rounds, John looks like he could put on a set of pads right now and drive you through the wall and let you off his block somewhere around Fourth avenue. I remember watching Don Staudenmayer play, I think it was like in 1986 or 1987. He was a quarterback, he wasn’t real big, or real strong, and I don’t remember him having blazing speed. I remember him being very sneaky, sneaky in a good sense. Staudenmayer executed excellent handoff fakes to the point it would piss me off. I was a photographer, trying to follow the ball in my lens, every time Staudenmayer faked the handoff my lens followed the running back, thinking he had the ball while firing off a half a roll of film on a guy who didn’t have the ball. He hid the ball well, ran a little half-ass roll out as though he didn’t have the ball and fire it downfield to some open receiver. He was open because his defender also went with the fake, it didn’t make me feel any better because I was busy reloading my camera with a new role of film for the next play. Staudenmayer’s style of play was very effective as evident in the fact that he completed a lot of passes that year.

If I had to look back at the overall history of Conshohocken football going back to 1893, I would tell you that there were two GOLDEN ERA’S of football in this borough. The first GOLDEN ERA of football was from 1914-1923. The Conshohocken professional football teams of that era led by manager Bob Crawford beat the best teams in the nation. A picture of the 1919 Conshohocken Professional Football Team hangs in the National Pro Football Hall of Fame located in Canton, Ohio. The 1919 team was loaded with talent and beat the Philadelphia Yellow Jackets. Crawford’s teams played at the dawn of professional football or as we know it today as the NFL, Crawford was invited to take a seat in the NFL along with Pottsville, the Yellow Jackets and others but turned the offer down.
The other GOLDEN ERA of football in Conshohocken came throughout the 1950’s. These were exciting times for our two high schools, both St. Matthew’s and Conshohocken High School. The “A Field crowds were unprecedented, both local newspapers, The Conshohocken Recorder and the Norristown Times Herald covered the games like they were the hottest sports story in the Philadelphia region. On Thanksgiving Day when they played each other both High school Bands would march up Fayette Street from their school, and march into the over-crowded “A” Field to the applause of thousands of spectators. Players who attended the St. Matthew’s/Kennedy football reunion and had the privilege of playing in the 1950’s included Winfield Dougherty, Sal Gambone, Lou Manetti, Tom Maloney, Bob Pickell, Joe Romasco, John Maloney, Doc O’Connor, Curt Hissner, Thomas Smith, Danny Allerton, and Jim Neve.

In 1953 St. Matthew’s started the season with a 53-14 victory over St. Patrick’s thanks to the fine play of Doc O’Connor who accounted for four touchdowns. Teddy Leszcynski had a 90 yard touchdown run after intercepting the ball at the ten yard line. A few of the other standout players on that ’53 team included John Pilcicki, Larry Moyer, Jimmy Haines, Joe Gravinese, Curt Hissner, John Maloney, Pete Bruni, Bill Mullen, Blasé Drotar, John Wilson, Jim O’Connor, Tom Smith, and Donald Brady just to name a few. The season ended at the “A” Field with a 7-7 tie with Conshy High in front of more than 6,000 residents and fans. St. Matt’s finished the 53 season with a 6-2-2 record. Just for the record 4,000 fans attended the game with St. Josephs, (Camden NJ) 4,000 fans also attended the game with Berwyn. When St. Matt’s played Salesianum of Delaware, it was the season poorest attendance, 2,000 spectators attended the game that featured a driving rain with heavy downpours from start to finish, and St. Matt’s lost that game 19-13.

In 1950, when Lou Manetti played the St. Matt’s eleven turned in a six win season with one of the big victory’s coming over Pottsville. Bill Kelly and Manetti led St. Matt’s with Manetti contributing touchdown runs of 13, 6, and 58 yards. Kelly was in a running mode on that November day 65 years ago scoring touchdown with runs of 65, and 80 yard runs, the final score was 40-19.

The largest contingent appearing at the reunion were players from the 1970’s. The class of 1970 attending included Bob Baer, Mike DeVito, Nick DiRenzo, (Who spent half the time talking about football and the other half talking about construction.) What ever happened to ninety percent of any guy’s time being utilized to discuss girls? Tom Flocco, Vince Flocco, Joe Kozeniewski, Tim Monacello, Jimmy Shaffer, (Who played football but still spends a lot of his time talking about basketball) Bill Shirley and Jimmy Zaleski were all from the class of 1970.

Part Three
Will include some favorite memories
from a number of players who participated during the 48 years
of St. Matthew’s/ Archbishop Kennedy Football. 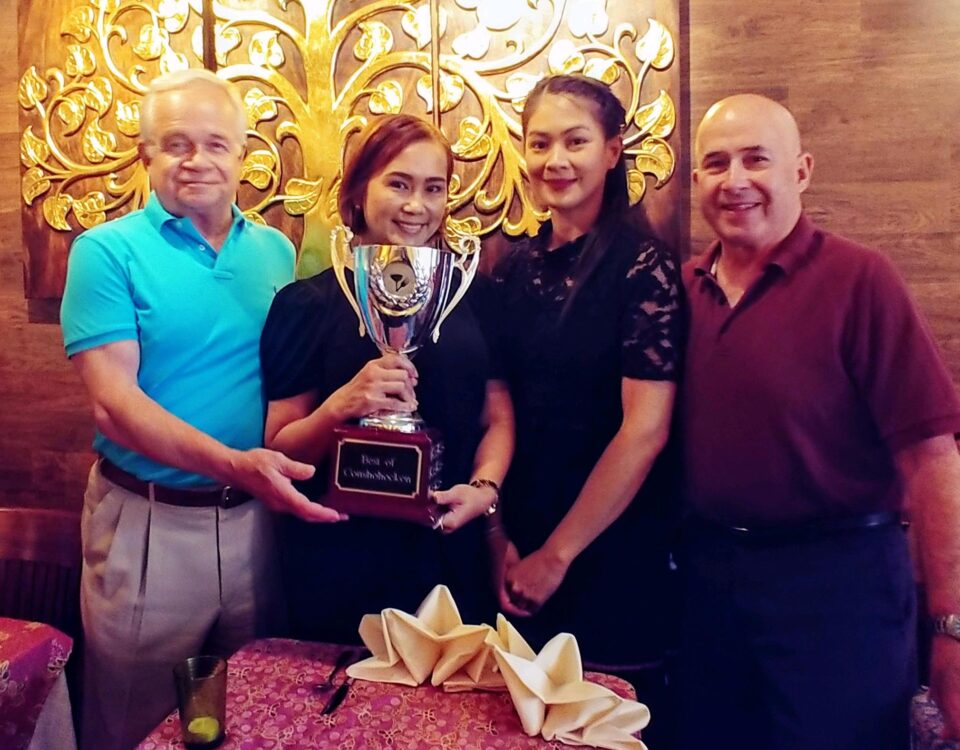