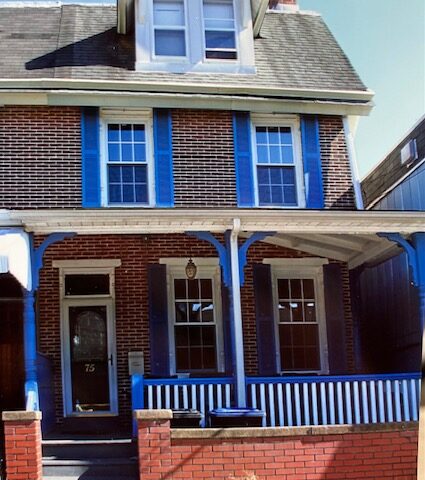 This is also one of those articles where it’s more about the person that lived in the house than the house itself, Enjoy!

The Victorian Colonial Revival house located at 75 Harry Street is one of a couple, of two and a half story brick buildings that were constructed around the turn of last century.  The lower part of the block was constructed between 1880 and 1895.  These houses, like so many of the early homes built in the lower end of the borough were constructed for the thousands of labors who worked the steel and textile mills mostly located along the river.

This article isn’t so much about the house as it is John “Perry” Smith.  Perry lived a normal productive life.  He was born in Zanesville, Ohio and shortly after his birth his family moved to Mays Landing, New Jersey.  His family worked in the oyster fisheries earning a decent wage of the day back in the 1880’s and 1890’s.  The family later left the Jersey coast for Conshohocken where Perry later landed a job with the Alan Wood Steel Company where he worked for more than 40 years.

Perry was also one of the many musical talents we’ve been lucky enough to have in the borough over the years.  He organized and directed a community musical band that he led for a number of years.

Perry became one of the Conshohocken Band leaders in a long list of talented band leaders and musical directors that included Joseph Pagliaro, John Moser, Pop Denno and Russell Cardamone, among others.  Perry’s son Leonard was also involved in the music business, he owned Smiths Music Shop once located at 68 Fayette Street and later retired as a supervisor of music from Abington Township schools.

Perry retired from the steel mill around 1930-31, but couldn’t sit still at home so he became a truant officer for the borough of Conshohocken.  A sad chain of events would lead him to his next job.  As the country’s depression era slowly recovered, more and more families were able to purchase automobiles and with that, traffic on Fayette Street grew more and more populated.

It seemed that more and more pedestrians were being struck by these automobiles along Fayette Street, many of them children.  Many of the Conshohocken Recorder newspaper front page headlines put the community on edge.  In June of 1932 a headline read: ‘STRUCK BY TRUCK ON WAY TO SCHOOL,” An eight-year-old West Ninth Avenue girl was struck by a delivery truck as she crossed Fayette Street at Sixth Avenue.  In April of 1933 the headline read: ‘CHILD DARS INTO PATH OF AUTO,” a six-year-old girl was on her way to St. Matthew’s School.  There were many of these headlines back then, mostly school children.

But it was an accident that happened on November 21, 1932 that forced the borough into action.  A six-year-old boy on his way home from St. Matthew School was crossing Fayette Street at Third Avenue when a Norristown Register newspaper truck driven by a 20-year-old Bridgeport man struck and killed the little boy.  We’ll spare you the details of the accident.

Within a month of the accident Burgess John Hampton, who served as Burgess from 1923-1939, and members of Conshohocken Borough Council, (There were 15 members on Borough Council back then) voted to hire a Traffic Officer who would be responsible for safely crossing any and all pedestrians including school children who attended St. Matthew’s grade school located on Fayette Street, (grades 1-8) and the Hoffecker grade school (grades 1-6) located at Third Avenue and Harry Street.

Perry Smith was awarded the job and as of January 1933, Mr. Smith proudly guarded any and all pedestrians crossing Fayette Street at Third Avenue.  (Traffic lights weren’t installed at the intersection until 1937) Over the next four years everyone in the borough and beyond knew Mr. Smith and his concern about crossing everyone safely at the intersection.  It didn’t matter if you were an adult or child, as soon as you showed up at one of the four corners of the intersection traffic was stopped in every direction for their safe passage.  Even after the traffic signals were installed in 1937, he didn’t care if you had a green light, traffic was stopped in every direction in order to cross the children safely.

Perry knew most of the adult residents by name and was said to know all of the children by name.  He would often greet the waiting youngsters at the corner with a “How-dee-do” adding a polite “How-are-you-lady” if the pedestrian was a female.

Well, things changed in January of 1938, members of Borough Council decided they no longer needed a crossing guard at the corner of Third Avenue and Fayette Street and informed Perry Smith, much to his surprise, that his services were no longer needed.

That decision to fire Perry set off a fire storm in the community that led to Conshohocken’s “First Protest.”  The Conshohocken Recorder newspaper headline from January 11, 1938 read: “SCHOOL CHILDREN STORM TOWN HALL, PROTESTING REMOVAL OF TRAFFIC OFFICER SMITH.”  When school let out on the day, he was terminated hundreds of children from both catholic and public schools marched down to borough hall, then located on West Hector Street, carrying signs and chanting “We want Mr. Smith.”

The doors of the borough hall/police station were locked and the children could not gain entry.

Following is an excerpt from an editorial in the Conshohocken Recorder newspaper from January 11, 1938.

A demonstration, the first of its kind ever witnesses here in the borough of Conshohocken, was made by pupils of the grade schools, Friday afternoon, after their dismissal from school.  The purpose of the demonstration was to protest to the borough authorities the removal of Perry Smith as traffic officer at Third Avenue and Fayette Street.

Several hundred children, carrying place-cards and shouting “We want Mr. Smith” marched to the borough hall, the doors of which had been locked.  When Chief of Police Walter Phipps appeared, the children surrounded him and continued their chant.  The chief was powerless to either quiet or disperse the children.  He made no attempt to use force.  He could not escape from the crowd as many of the children believed he had the power to reinstate Officer Smith.

From the borough hall, the children centered their attention upon the Recorder newspaper office, where the Chief had taken refuge.  (The Conshohocken Recorder newspaper office and printing plant was located on the northwest corner of Hector and Forrest Streets while the police station was located just across the street on the southwest corner at the same intersection) The crowd was uncontrollable but there was no violence.  Quite reigned when a youngster saw a photographer pointing his camera from a window at the Recorder building.  The youngsters, without any suggestions, quickly gathered and posed for a picture, which is printed elsewhere in today’s Recorder.  The youngsters were dispersed in a unique manner; former Chief Francis “Bunny” Blake came to report at borough hall.  He was unable to enter.  The crowd of youngsters quickly surrounded him.  He went to the Washington Fire Station next door and the youngsters gathered in front of the place.  The former chief recognizing the danger in case there should be an alarm of fire, quickly left the station.  The youngsters followed him.  He led them through Hector Street and the children sensing they were being taken on a hike, quietly dispersed.

The school children have a deep affection for Officer Smith, who for the past five years has guarded the street intersection, and during that time there has not been a serious accident there.  He has maintained a rigid but friendly, beneficial discipline among the children, which they respect and obey.  It is natural that the youngsters want their friend to be their guardian.

Five years ago, following a fatal accident, town council and the burgess recognized the need for guarding the Third Avenue and Fayette Street crossing used daily by hundreds of school children.  Perry Smith was elected traffic officer to guard the children at the intersection.

The following week at the monthly council meeting dozens of residents turned out for the meeting to speak on behalf of Perry.  A 10-3 vote to reinstate Perry Smith to the position of Traffic Officer was passed and Perry assigned to cross the children at Third Avenue and Fayette Street, all for $60.00 per month.

John Perry Smith passed away a little more than fifteen years after the protest, at the age of 85 in November of 1954, and yes, he was still the crossing guard at Third Avenue and Fayette Street.  By the time Perry passed away he was known as “The Traffic Father” of his great big family of boys and girls who all hailed from the two borough grade schools.  It was said if he could have seen the tribute and flowers from the grade school children both current and past, he would have been thrilled.  Both schools had taken up collections and besides all the flowers sent to Moore’s Funeral Home at 16 East First Avenue a beautiful tribute was bestowed upon Perry.

Perry was an ordinary Conshohocken resident who managed to make a difference in our community.

He was the first in a long line of crossing guards in the borough for nearly 90 years and he set the standard for children’s safety extremely high in our community.

A photograph that appeared in the Conshohocken Recorder Newspaper on January 11, 1938, showing Perry Smith back on the job as he prepares to cross school children across Fayette Street at Third Avenue.

While reading through all our articles please take note of our advertisers, they are all local, proven professionals and we can tell you first hand that the Conshohocken restaurants are among the best restaurants in the Philadelphia region!