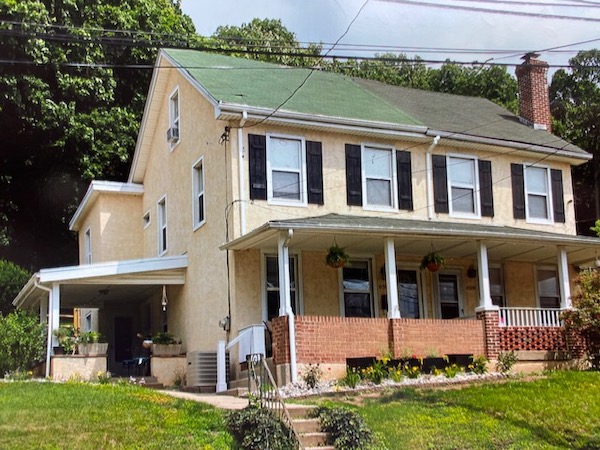 But That’s Only Half of Walt’s Story

Walter N. Hannum, throughout a good-portion of his life was known as “Uncle Walt.”  Walt was also referred to on many occasions as a “Fascinating Man,” and for good reason, so. Here’s the story of Uncle Walt Hannum.

Walt was born on September 9, 1877 in the Broomall section of Marple Township and moved to Balligomingo Road in West Conshohocken at the age of four in 1881 where he lived with his parents between Bullock’s Mill and the Tinkler Mill, textile manufacturers. Then they moved to the Wilsontown section of West Conshohocken where they lived on the 600 Block of Ford Street, then the 800 block of Ford Street before moving back to the brand-new housing development in the 600 block of Ford Street then known as “Noblit’s Row,” a row of houses built by Alfred Noblit.  In May of 1906 Walt bought a house at 630 Ford Street, just across the street from Noblit’s Row.  A month later on June 6, 1906, Walt married the former Elsie Earl of West Conshohocken, the couple continued to live at 630 Ford Street with their three children until 1953. Then they moved across the Schuylkill River to Conshohocken to East Sixth Avenue and later to 140 East Fourth Avenue where he passed away in November 1967 at the age of 90.

Walt attended the Rebel Hill School before attending the George Bullock School then located at the corner of Bullock Avenue and Church Street in West Conshohocken.  Walt graduated from high school in 1895 and worked a few jobs before landing at the Conshohocken Recorder newspaper on February 10, 1896.  The Recorder newspaper was a little more than 25 years old at the time and was owned by James Tracy, James Hall and James B. Holland who later became a district attorney and a Montgomery County Judge.

Shortly before World War One Harry and Irving Heywood purchased the paper and the Recorder’s offices were then located at 64 Fayette Street, in later years the paper offices and printing plant moved to 100 West Hector Street.  For the next six decades Walt would call the Conshohocken Recorder Newspaper home.

In 1896 both Conshohocken and West Conshohocken had dirt roads, the main means of transportation was by horse and wagon, the Fayette Street trolley’s or by train.  Goods from the many mills along the Schuylkill River were transported by barges along the canal, or by train.

In 1896 the Burgess of West Conshohocken was William McKenzie followed by Howard Whitehead.  In 1896 the Conshohocken Burgess was Dr. George N. Highley, Ironically Walt’s grand-nephew Benjamin L. Hannum was Mayor of Conshohocken from 1966-1969.

Walt started at the Recorder newspaper in the early years of hand-set composition, the printers picked the individual letters from “Job boxes” and placed them in the “stick”, all familiar terms to the old-time printers.  Hannum started as a “devil” or printer’s helper, but was sent to Brooklyn in 1899 to learn to operate the Mergenthaler linotype machine, the same machine that was being used 60 years later in the Hector Street printing plant.  He continued to work in the mechanical department of the paper until the 1920’s, when he was placed in the editorial department.  He covered everything, obituaries, sports and social items doing everything that a cub-reporter covers.

Then he became the papers sportswriter and for more than two decades he covered everything from sandlot to high school, the church basketball league to professional sports.  When he moved on from the sports department to the town happenings it brought him in contact with public officials of the day.

Mr. Hannum was appointed secretary of the West Conshohocken Borough Council in 1927, where he served in the capacity until 1942.  In 1943 he was appointed treasurer of the council and served until 1953.  During and between his holding these offices and his reporting chores, he also served several years as borough auditor.

His public service actually began when he was just 33 years old and was elected to the West Conshohocken School Board in 1910, serving two terms.  As a member of the school board, he also served as treasurer for several terms.  During his time on the School Board, he instituted a checking account for the board’s finances, (checking accounts were something that was brand-new back in those days). He was also instrumental in bringing science and commercial courses to the school curriculum.

Years later when Hannum looked back at his newspaper career he stated that one of the things he was most proud of was, as an avid follower and reporter of Conshohocken High School football games, he gave the name “Golden Bears” to the team, which was used from 1926 thru 1966, when the high school closed.  He also held a directorship and life membership in the Conshohocken Church Basketball League and was a member of the Schuylkill Valley Oldtimers Club.  The church basketball league was extremely popular from the 1930’s thru the early 1960’s.  Hundreds of residents would gather several nights a week to watch the sold-out games.

The Philadelphia Sportswriters Association honored Mr. Hannum in 1954 for contributing honor and integrity to the sports-writing profession.  He was presented with a life-time membership and an engraved pen and pencil set.

For a number of years after retiring he continued to attend sports events and continued to participate in his only local fraternal association, the Conshohocken Lodge 117, Knights of Pythias their headquarters was then located at Second Avenue and Harry Street.

He also continued to write a weekly column after retirement titled “Remembering 56 years” referring to his time spent as a reporter for the paper.  He would recall a lot about the borough’s early days of sports, politics and developments in the community.  To-this-day I still refer to Walt’s columns when researching information for an article that I’m working on.

Walt contributed an awful lot to both Conshohocken and West Conshohocken for more than six decades and was forever grateful that he worked in a fascinating profession and that my friends is what made Walt Hannum a fascinating man.

There are more than 40 editions of “History of a House” telling interesting stories of residents who lived in houses up and down the streets of the Conshohocken’s, all these stories can be found on Conshystuff.com.

A lot of our small businesses have had a tough couple of years so please take a look at our advertisers and perhaps if you are in need of a service, you could utilize one of established and local businesses advertising on our site.

Thank You for supporting Conshystuff.com

The house currently located at 630 Ford Street in West Conshohocken where Walt Hannum lived with his wife and three children for nearly a half a century.

The house located at 140 East Fourth Avenue where Walt lived in the later part of his life.

A photograph of Walt sitting back in the Conshohocken Recorder office then located on West Hector Street.

Conshystuff.com has more than 40 articles of a History of a House, all very interesting houses and residents.

Be sure to check-out our site sponsors who are all small family-owned businesses located in and around Conshohocken.