This doesn’t belong in our community or anywhere

It’s no secret I’ve been working on the upcoming 1980’s Conshy Adult Prom taking place this Saturday at the Great American Pub. While I’ve been working on it, my mind has been wandering to the 1980’s in and around Conshohocken. So, let’s take a look at some things around the community back in the 80’s.

Mr. Jim Donofrio started coaching Plymouth Whitemarsh boys basketball in the fall of 1988, those of you who have been around Conshohocken for awhile may recognize the name Donofrio and think of the old Conshohocken Fellowship House. If you think of the Fellowship House in the 1980’s you’ll remember Floyd Shaffer, Frank Zoltowski, Jimmy and Maureen Moore. You are probably thinking about kickball and trying to get it onto the balcony. Maybe you’ll think of a movie night or a dance at the Fellowship House. There was even a talent show or two there over the years and before we move on from the Fellowship House, let’s circle back to the name Donofrio, and the legendary Donofrio Basketball Tournament. If you attended the event over the years, your mind might race to some of the all time greats to play on our little court. The 80’s was full of local talent who played here who went onto the collegiate level or beyond.

Schools back in the 80’s…. You had Hervey (Not Harvey) Walker which became Conshohocken Elementary School, Saint Mary’s, Saint Matthew’s, Saint Cosmas and Damian were all grade schools as well as Archbishop Kennedy and Plymouth Whitemarsh High Schools. Each of these schools had hundreds of kids and these kids roamed the streets after school. Hitting places like Jem’s, JD’s, Frank and Eddie’s, Tony and Joe’s, Bolero’s, Pizza Time Saloon, Jim’s, my favorite place Josie’s. Maybe if it was a nice day you’d stop in Walt’s Sport Shop for some bait to fish in the dirty river (it’s much cleaner now believe it or not)

I recently saw a photo of a friend of mine wearing a pair of Jam shorts… these things were the height of fashion at a certain point in the 80’s and because of that….. most of us living in Conshohocken at the time could not afford a real pair. If you were like me.. you may have been wearing some home made Jams.. with a funky pattern your mom bought at one of those fabric stores. God bless my mom, she tried, she tried so hard…. but there was a difference between what my mom sewed up in our living room versus what the kids were wearing on tv…. thanks mom for trying all these years later, I love you. Do you know what was another huge, massive fashion of the 80’s.. Jordan’s. If a guy showed up to one of the outdoor courts around the Fellowship House, or Sutcliffe Park, or the old Battery C park, that dude was getting picked first. Those shoes gave you the ability to glide on air, or at least look good strutting around Conshy.

Pop culture was all around us, even though the old Riant movie Theater was closed by the 80’s, you still had the Plymouth Cinema at the Plymouth Square Shopping center and before the most expensive gas station in the area at the 5 point intersection by Colwell Lane and Ridge there was the old drive in movie theater. The Plymouth Meeting Mall was also home to a movie theater. Between these three places you didn’t have to drive far to see Empire Strikes Back, or one of the Indiana Jones movies. Of course, you didn’t have to leave your house once MTV was introduced… at least in the beginning when they actually played music videos.

If we’re talking music, I clearly remember playing on Forrest Street on July 13th, 1985 as Live Aid was unfolding around the world. Local favorites the Hooters played early at JFK and I remember seeing them at Archbishop Kennedy not long before they made it big. During the day I’d run into the house and hit record on the VCR when some of my favorite bands played that day. I wish I could tell you I was cool enough to have watched Queen perform and realize what I witnessed, but at the time, I was just as happy to see Hall and Oates, Duran Duran, Simple Minds, Madonna and the big one for me at the time was Phil Collins playing in London solo and then flying to Philly to play with Led Zeppelin.

Sports.. when the 80’s started I remember being at the Phillies World Series parade, the Sixers had some great years and the Eagles had a Super Bowl appearance and by the end of the decade we were all cheering on Randall Cunningham and Reggie White and company… here in Conshy, you may have been playing box hockey at one of the local parks, or riding your bmx bike all around the borough. Skateboarding was making a comeback in the borough, until a long lost law was found that banned skateboarding in Conshohocken. At Sutcliffe park you may have played for the Falcons, Robins, Cardinals… I seem to remember a talented group of baseball players winning the district at the end of the decade and a few years later some of those players would play for Plymouth Whitemarsh High School and win the state championship in dramatic fashion. The Conshy Golden Bears had some great teams that would lay the foundation for great teams at P-W and Archbishop Kennedy. Archbishop Kennedy had an undefeated season under coach Chris Bockrath in the early 80’s and won a few league championships.

You probably shopped at the ACME, walked to school or work…. watched fireworks at the A-Field (thank AMBUCS for always figuring out a way to pay for them) on the 4th of July after watching the Soap Box Derby. On Sundays you might have had breakfast at Bocella’s or the old 401 Diner. If you were lucky, a big night out may have been at the Ponderosa on Ridge.

In the big picture… the 80’s brought the Conshohocken’s a new bridge, new office buildings where small family owned stores once stood. The silt basin was still there before Cardinal View and Kennedy Crossing were built. 5th Avenue on the west side was a dead end and didn’t connect to Colwell Lane. The Conshohocken Recorder was still delivered door to door, once a week for free before they started charging something like a quarter… Moore Chevy was still the place to buy your car (at least in the borough limits, you could also visit Bernie Murray or Dom Conicelli) Conshohocken had a couple of video stores where you could rent VCR tapes (be kind, rewind) there was an arcade on lower Fayette. All around there were hints as to what the borough would become. I played football along West Elm street where small businesses and houses once stood. You would carve a field out of the rubble of the properties. The new bridge opened on November 27th, 1987 and that seemed to kick off a new way of life in the twin boroughs. At the time, the new Matsonford Bridge cost $12 million which today buys you a row house somewhere in the borough (I joke, but boy has the housing market went through the roof)

This is a great place to stop, even though I could talk about Conshy in the 80’s for a long time… I need to actually get working on this Conshy Prom – Back to the 80’s. Taking place Saturday February 26th at the Great American Pub. Get your tickets at Coll’s Custom Framing or use this eventbrite link: Conshohocken Adult Prom – Back to the 80’s Tickets, Sat, Feb 26, 2022 at 7:00 PM | Eventbrite 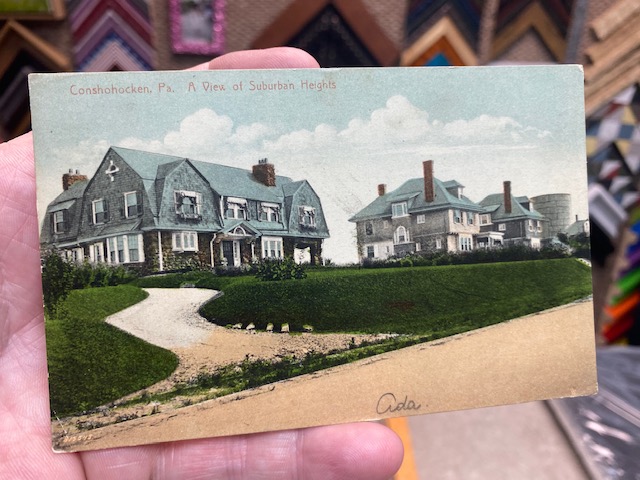